Today 1 in 4 people worldwide suffer every year from some form of neuropsychiatric illness. Psychiatric medications act to ease some of the symptoms with no cure, due to lack of mechanistic insights into how these diseases initiate. One factor known to exert extremely broad influence on brain development and network formation is gamma-aminobutyric acid (GABA). Abnormalities in GABAergic neurons and defects in cortical inhibition have been implicated in the etiology of autism spectrum disorders, epilepsy, schizophrenia, anxiety and depression. Given the significance of abnormal early brain development for these serious psychiatric illnesses, GABA-mediated signaling during development by neuronal progenitors/neurons has been extensively studied. Brain development, however, is not limited to neuronal changes but is also supported by concomitant development of its vasculature. After establishment of the periventricular vascular gradient by embryonic day 11, excitatory glutamatergic projection neurons and inhibitory GABAergic interneurons navigate along diverse courses from ventricular zones, radially and tangentially, to adopt final laminar positions and synchronize cortical microcircuits. While radial glia was established as the substrate for radial neuronal migration in the early seventies, our studies have shown that the developing vascular system exquisitely patterned amidst neurons is the substrate for GABAergic neuronal tangential migration. It highlighted the autonomy of periventricular versus pial vascular networks and revealed that they are independently capable of guiding deep versus superficial GABAergic neuronal populations en route to the cortex.

Our findings implicate a new cell type – periventricular endothelial cells as being contributory to a wide swath of psychiatric diseases with schizophrenia, epilepsy, mood, bipolar, depressive disorders and autism topping the list. Interestingly, endothelial cell specific deletion of a single GABAA receptor subunit during prenatal development was sufficient to cause behavioral dysfunction similar to psychiatric disease that are characterized by one or more of these core symptoms – impaired social interactions, communication deficits, depression and increased anxiety. Furthermore, elimination of endothelial GABA release during prenatal development affected postnatal developmental milestones and resulted in a model of childhood epilepsy or autism spectrum disorder. Of note, variation in brain endothelial GABA levels was able to contribute to diversity in psychiatric disease symptoms. Overall, these results indicate that multiple pathways in different cell types (endothelial and neuronal) co-exist in patients with psychiatric disease, synergistically inducing the highly complex form of disease; and it is crucial to understand the implication of autonomous pathways within each cell type and how they interact with one another. Our research thus addresses this important problem with the goal of finding effective cures. 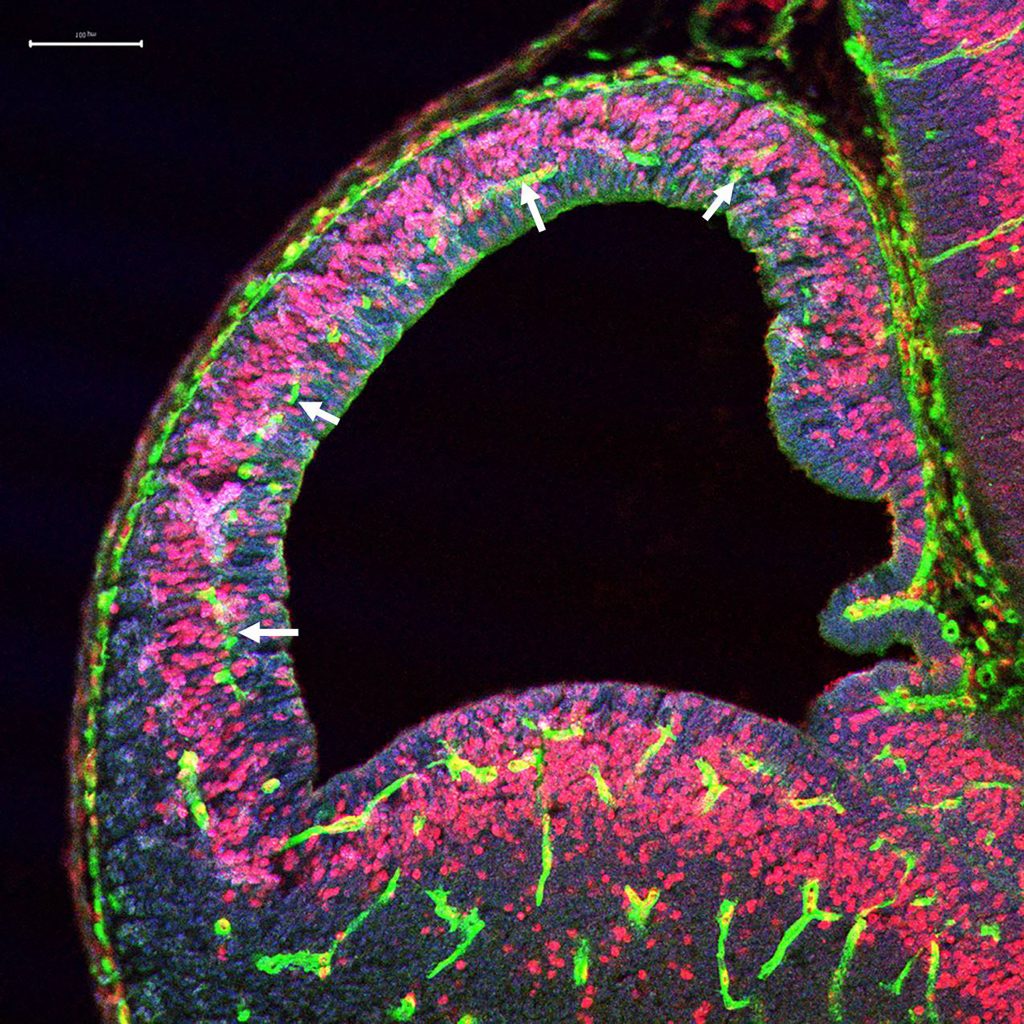 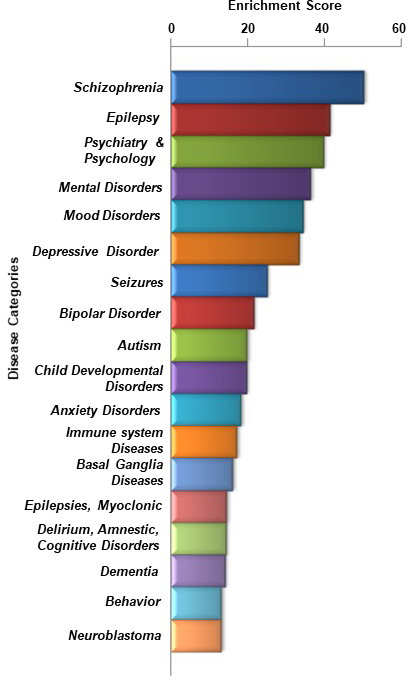 Periventricular Angiogenesis and Disease. A classification of genes expressed in periventricular endothelial cells that were particularly enriched in several psychiatric disease categories.

The generation of several mouse models with abnormal GABAA receptors and GABA function which recapitulated defective behavior similar to those seen in conditions like schizophrenia, autism, epilepsy, mood and anxiety disorders as well as human studies were important for understanding the pathobiology of these neuropsychiatric illnesses. However, all the mouse models reported until now are systemic or region-specific knockouts of the GABAA receptor-GABA pathway. We cannot establish a cause – effect relationship between endothelial and neuronal development with use of such mouse models. Therefore, as part of our ongoing work, we have created two new mouse models – one that specifically blocks GABA release from endothelial cells (Vgat ECKO) and the other – with dysfunctional endothelial GABAA receptors (Gabrb3 ECKO) that will serve as new tools to study how GABA signaling shapes neurovascular interactions during embryonic development and how this select pathway leads to psychiatric disease. With the use of these models we are trying to unveil new mechanistic insights into how endothelial GABAA receptor-GABA signaling modulates angiogenesis pathways, vessel function and complex psychiatric behaviors. Endothelial cell secreted GABA is an important link for establishing neuro-vascular interactions and fostering long distance GABA neuronal migration during embryonic brain development. Identifying the signaling mechanisms by which endothelial GABA achieves its paracrine actions on GABAergic interneurons and autocrine actions on angiogenesis is a key element of our current projects. Creation of a third mouse model is also underway to understand the significance of intriguing synapse specific gene expression in cortical endothelial cells.

1) In the prenatal brain: We are currently testing whether restoration of periventricular angiogenesis by exogenous means during a critical window of prenatal development can rescue defective brain development and subsequently postnatal and adult behaviors in our mouse models of neuropsychiatric disorder. Pro-angiogenic compounds are being used to restore neurovascular interactions in the prenatal brain and ameliorate postnatal behavioral symptoms. 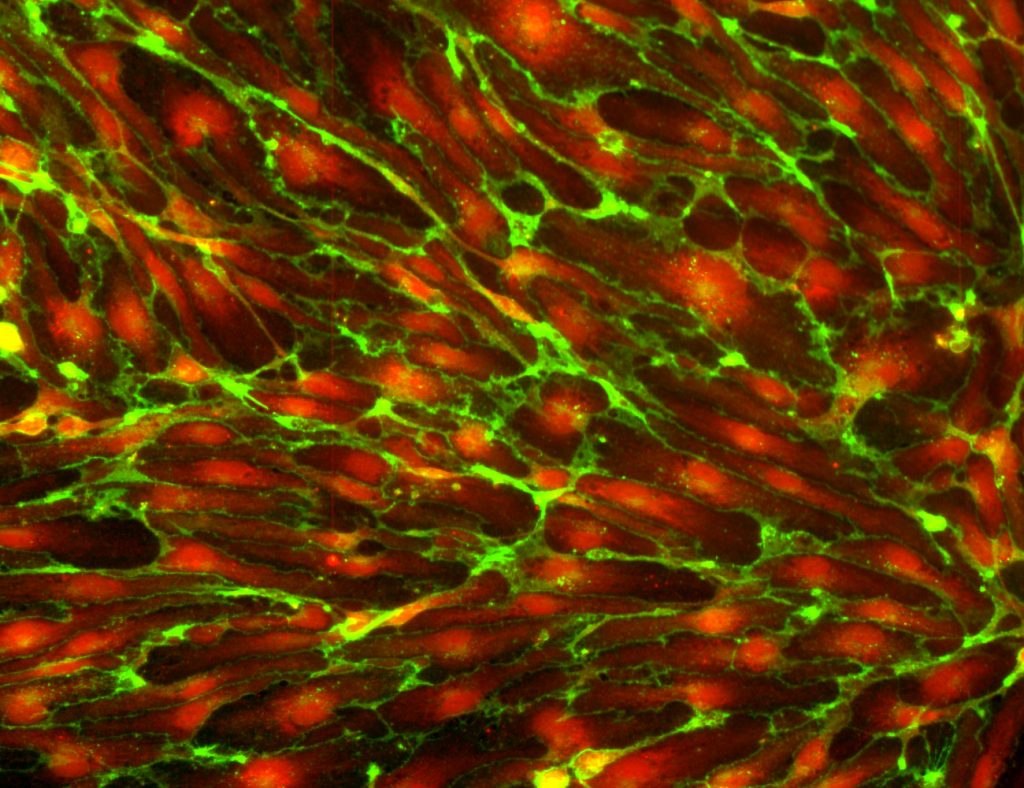 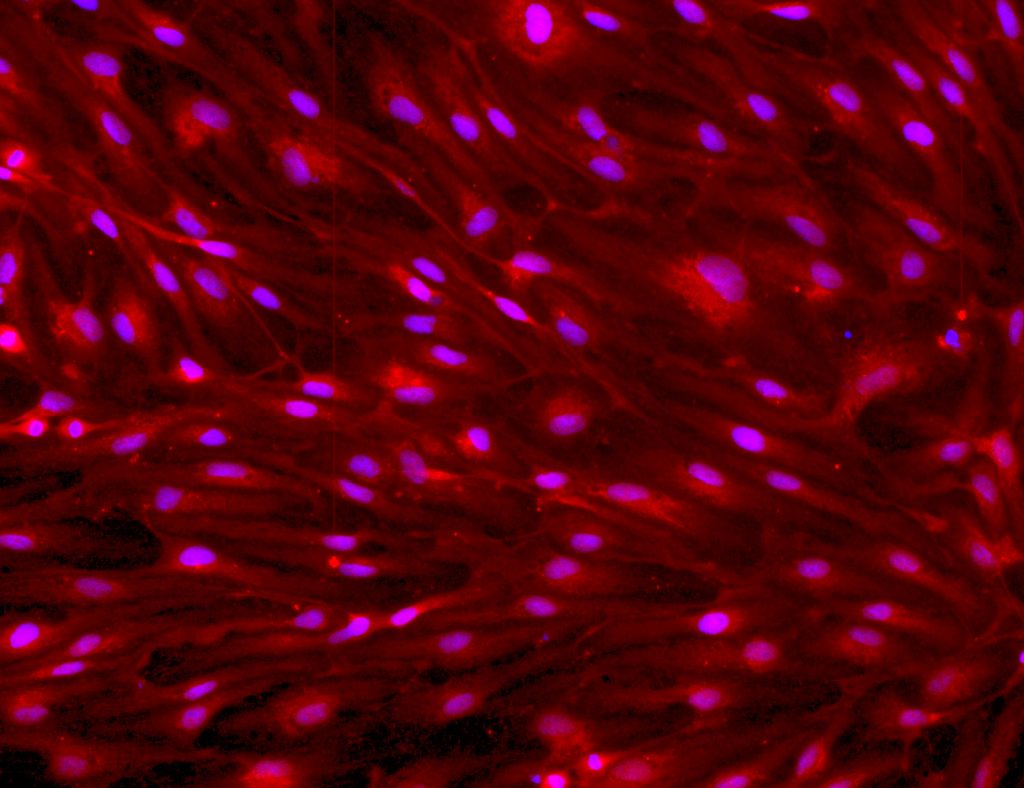 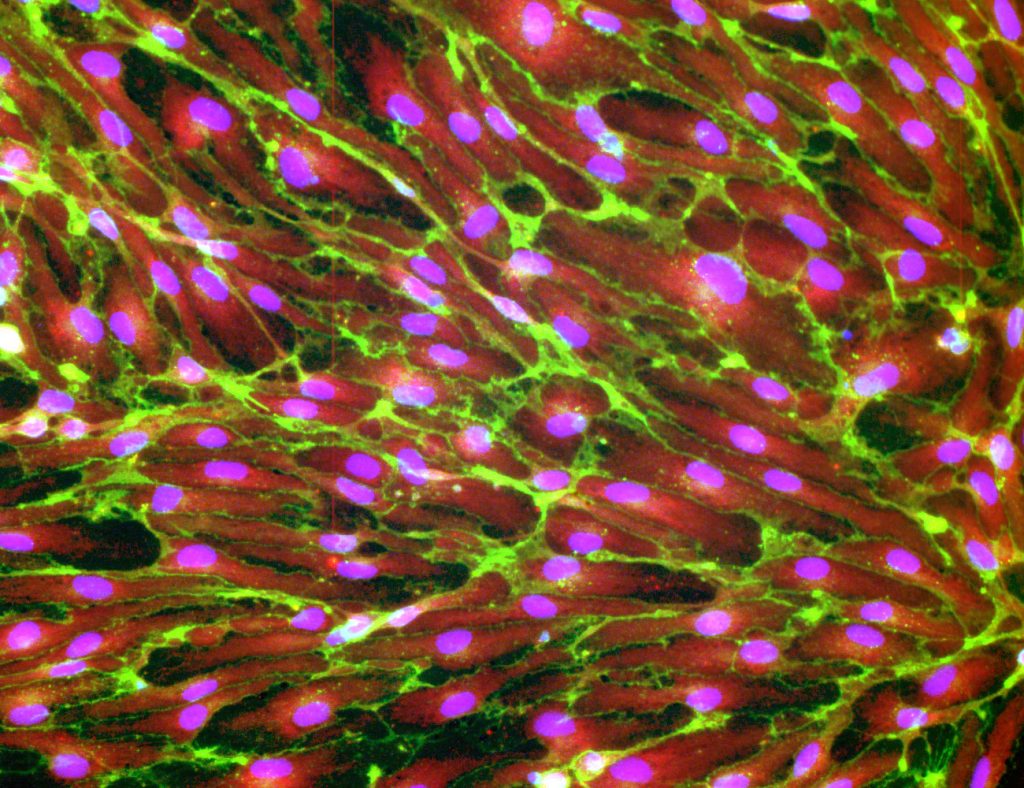 2) In the adult brain: Cell transplantation is a powerful tool to introduce a new source of GABA to allow reconstitution of neural circuits in the diseased brain. To be successful, grafted cells should possess the ability to migrate and disperse through affected areas, differentiate into fully mature neurons, functionally integrate and modulate circuitry activity in the damaged host brain. In the last decade, a better comprehension of GABAergic interneuron origin and development has led to their use in transplantation. One issue however, that needs improvement is the migration efficiency of transplanted cells. Another problem is that several GABA producing cell types have transient effects after transplantation due to decreased GABA release over time. Our key fundamental discovery that pre-formed vascular networks are the natural guides for GABAergic neuronal migration from the earliest developmental time point assumes a new significance here. We are testing whether co-transplantation of human periventricular endothelial cells and GABAergic interneurons can serve as an effective cell-based therapeutic alternative for GABA related diseases.